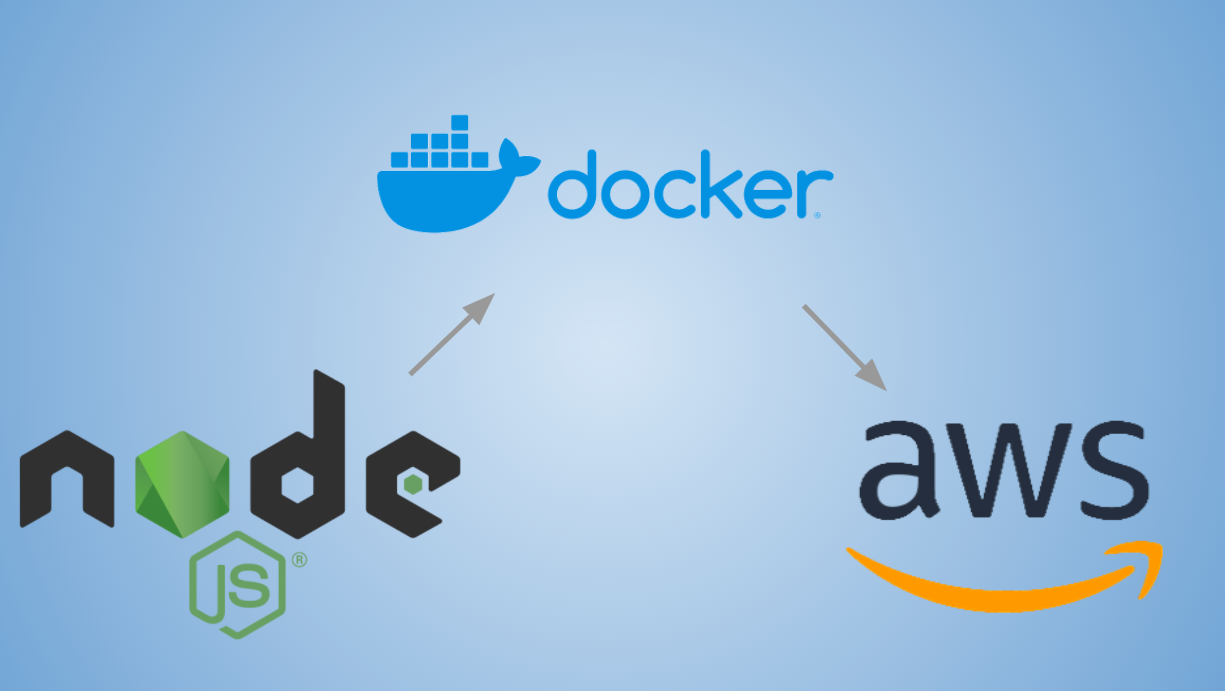 Once you've got a web application running locally on your machine, if you want to access it on the internet, you've got to deploy it. And instead of just deploying it manually on a virtual machine in the cloud, let's dockerize the app and then deploy it to the cloud. If you're not familiar with Docker, follow this excellent tutorial first.

To deploy your Node.js app to AWS using Docker, you'll need the following:

If you get a version number, you're good to go. If not, Docker did not get installed properly. Do not proceed until Docker is properly installed - use your google foo to debug it!

...you might have to change your path. Fire this in your terminal (based on your python version):

And then add this above line to your bash_profile:

2) Overview of Docker and AWS

Docker is open source software that allows you to pack an application together with its required dependencies and environment variables in a container that you can ship and run anywhere. It is independent of platforms or hardware, and therefore the containerized application can run in any environment in an isolated fashion.

Docker containers solve many issues, such as when an app works on a coworker's computer but doesn’t run on yours, or it works in the local development environment but doesn’t work when you deploy it to a server.

Amazon Web Services (AWS) offers a reliable, scalable, and inexpensive cloud computing service. As I mentioned before, this tutorial will focus on using the ECR and ECS services of AWS. So many acronyms, I know.

3) The Node.js app to deploy

If you have a node app that you'd like to deploy, skip to Step 4. If not, let's quickly build a very simple node app that we'll use for the purpose of this tutorial. Once you get the hang of Docker and AWS, it'll be a synch to deploy any node app to AWS with Docker.

Enter the following in your terminal (obviously not with the comments!):

Open server.js in your IDE like VSCode and create this simple app:

Then run your app with this command in the terminal:

Now point your browser to http://localhost:3000 and you should get a "Hello from your Node.js App!"

Next, we're going to dockerize our app.

We are going to start dockerizing the app by creating a single file called a Dockerfile in the base (root) of our project directory. This file has no file extension. You can either create this file in your terminal with the touch command or in your IDE.

The Dockerfile is the blueprint or recipe from which our images are built. And then images turn into containers, in which our apps get run.

Every Dockerfile starts with a base image at its foundation. There are two ways to create your Dockerfile:

We will proceed with the second approach. Let's use the official Node.js image hosted on Docker Hub which is based on Alpine Linux (because Alpine is much smaller than most distribution base images).

Open your Dockerfile and type these commands in (change the port at EXPOSE to match what's in your server file if it's not 3000 and then adjust the last line to the path of your server.js file in relation to your project root folder):

Let’s walk through this line by line to see what is happening here, and why.

With this completed Dockerfile, we are now ready to build a new Docker image.

Make sure that you have Docker up and running. Now that we have defined our Dockerfile, let’s build the image with a title using -t and don't forget the dot at the end:

This will output hashes and alphanumeric strings that identify containers and images saying successfully built and tagged on the last line:

You should see the image we just created as the most recent based on time:

Copy the image ID. Then, to spin-up the container, run this command (replacing image-id with your actual image ID:

By default, Docker containers can make connections to the outside world, but the outside world cannot connect to containers. -p publishes all exposed ports to the host interfaces. Here we publish the app to port 80:3000. Because we are running Docker locally, go to your browser and you should see your app running in your container at http://localhost:80 which is the same as going to http://localhost (without entering in port 80).

At any moment, you can check running Docker containers by running this command from another terminal tab (since your server is running in your initial terminal tab):

From this terminal tab, stop the container from running with:

Leave the Docker daemon running. It's time to configure AWS.

7. Create the registry and push your app image there

The keyword “Elastic” means you can scale the capacity or reduce it as desired.

Before we get to pushing up our app image, ensure that your AWS CLI can connect to your AWS account. To do that, you'll need your AWS Access Key ID and Secret Access Key. If you didn't save them when they were created, you'll have to create a new set of keys. To get a new set of keys, go to your AWS Console, then under your username, go to My Security Credentials, then expand the Access keys bar, click on Create New Access Key and save them in a safe place:

Then from your terminal, run:

If your AWS CLI was properly installed, aws configure will ask for the following:

Enter your Access Key ID, your Secret Access Key and the Default region name of your account (for example us-east-1 for the Northern Virginia datacenter or us-east-2 for the Ohio datacenter) and just enter (skip) at the Default output format.

Confirm that your AWS CLI is properly configured by once again running the aws configure command and pressing enter at each prompt to accept what's already there:

Steps to create the registry for your images:

Then click on View Push Commands on the upper right and follow the 5 instructions from the AWS console for building, tagging, and pushing your Docker image:

Note: The arguments of the following are particular to my registry and will differ from yours, so just follow the steps outlined on your console.

Explanation of the push commands:

Note: If you receive an “Unknown options: - no-include-email” error, install the latest version of the AWS CLI. Learn more here.

Note: If you are using Windows PowerShell, run the following command instead:

If successful, you should get an output of Login Succeeded.

This is what my terminal looks like after I ran the push command:

Now go to your Amazon ECR and click on your repository name and you should see your Docker image there. Copy the Image URI and keep it handy, we'll need to paste it in the next step:

Next we'll create the Task, Service, and Cluster to run this Docker image on an EC2 instance. This part can be tricky, so follow along closely.

Tasks on AWS function just like the docker run command on the Docker CLI. They define:

Here's an overview of how Amazon ECS structures the container, task, service and cluster (we're going to go from the inside out):

9. Create an IAM role for your cluster

Before you create your cluster, you'll have to define an AWS Identity and Access Management (IAM) role. Here's a little primer from AWS:

What are IAM roles?

IAM roles are a secure way to grant permissions to entities that you trust. Examples of entities include the following:

So for AWS Elastic Container Service to be able to spin up an EC2 instance and run your Docker container, it needs explicit permissions. Let's create an IAM Role to enable that.

Steps to Create an IAM Role:

Now let's use this role when we create our cluster.

A cluster is where AWS containers are run. They use configurations similar to EC2 instances.

Steps to Create a Cluster:

It'll take a few minutes for the Cloud Formation Stack to finish processing. Once processed, you should be able to click on View Cluster and see the status set to Active.

11. Create a Service to run the Cluster

Now let's create a service to run this cluster.

Steps to create a Service:

Once Active, click on the Cluster name (for example: sample-app-cluster) to go back to our Cluster page.

Steps to verify that container is launched and running:

Woo hoo! Congrats on finishing this marathon tutorial! You now know how to Dockerize a Node.js app and deploy it on AWS. That is no small feat. You can feel proud of your DevOps chops. Now go and deploy a real app.

Grab the code for the Docker part from Github.

If you run into any problems with these instructions or notice any typos, please drop me a line here.